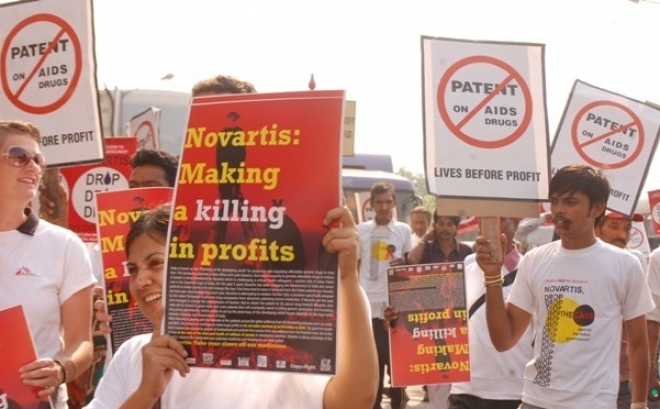 On April 1, 2013, news broke out, and was immediately relaunched by all the top national newspapers, that the Supreme Court of India had rejected the appeal of the Swiss pharmaceutical company Novartis, that had been opposed to the production of a "low cost" anti-cancer drug that was essentially the copy of the Glivec medicament, of which Novartis owns the patent. The fundamental point of the issue was that the original patent had expired, but Novartis had re-patented it in a slightly different version. The Supreme Court declared that the practice of re-patenting was inconstitutional unless it could be proved to actually change the effective healing power of the medicine. This fundamentally means that in India, (and maybe in other parts of the world) this life-saving drug will now be available to everybody.
Closing the article is an enlightening video about evergreening produced by Doctors Without Borders. We wish you a nice reading!

An important victory was obtained in the right to use generic drugs and the organization Médecins Sans Frontières (MSF) / Doctors Without Borders, played a primary role in it, after having conducted a campaign against Novartis on this issue for many years. With reference to the case of Glivec, the cost of a therapy with this drug, is around 32,000 euro per year. Currently, where Social Welfare is more advanced, this cost is paid by the State, otherwise, in many other countries directly by the citizens. This makes the use of these treatments obviously the prerogative of wealthier nations or citizens, Now, hoping that this good news is not and April Fool’s joke, it may be worth going deeper into the subject.

Glivec (Gleevec in the United States) is the trade name of a molecule, Imatinib, created through the technique of drug design, which consists in artificially creating molecular compounds that inhibit the action of a protein necessary for the survival of tumor cells.
The issue on which we would like to reflect on is the following: if it is true that Nicholas Lydon, connected to Novartis, has contributed significantly to the invention of this molecule, it is also true that other significant contributions were made by scientists from other research centers including Brian Druker (Oregon Health and Science University), the Italian Carlo Gambacorti-Passerini University of Milan Bicocca, John Goldman of Hammersmith Hospital in London, and finally Charles Sawyers of Memorial Sloan-Kettering Cancer Center.
More generally, it is obvious that the research that led to the development of this drug laying the foundation of all scientific research previous year, or the countless publications that have slowly created the vast area of knowledge that has allowed this discovery. Research carried out by both public and private centers, but mostly public.
More generally, it is obvious that the research that has led to the development of this drug is based on the foundations of all the scientific research that came before, and this means the countless publications that slowly created the vast area of knowledge that brought to and allowed for this discovery. Research was carried out by both public and private centers, but mostly public.
The development of ideas in science has always followed a peculiar way, that could be called an open licence Creative Commons attribution before its time. In fact, once a finding is published, anyone can continue the search, provided they cite the paper (publication) that preceded them. Most of the times the new research also brings to a new paper, which in turn will inspire other scientists to other discoveries. This mode of sharing share-alike (and here is another typical concept of CC licences) allows, in all areas, ideas to grow, expand and improve. And it is no coincidence that scientific research has been proceeding on these tracks for centuries, tracks that are very far from those of traditional copyright, with the awareness that the survival of the concept of science depends on this openness and sharing of ideas. We could say that pure scientific research has always embraced the principles of copyleft, and that is to share and change the ideas of others, while respecting and recognising the contributions of the authors that came before.

The question then is: if a whole system of research has been moving on with publications and discoveries that are completely open in science, how is it possible that we have got to the patenting of a drug, even though it is based on these foundations that are "open" and owes its existence to this?
The answer lies, in my opinion, on economic considerations.
The phases from the discovery of an active substance in the laboratory, to the production and testing of a drug in the real world, implies a stratospheric increase in costs, that public research centers are rarely able to support. Furthermore, most of the times, the active substance does not pass the test phases, and so the money invested disappears in smoke. Only the pharmaceutical companies are able to invest high risk capitals. So, even if public research centers have contributed significantly to a discovery, the last very expensive mile that turns a discovery into a drug, will still be taken up by multinationals such as Novartis. They then impose their copyright on the discovery, and protect their rights according to a distorted concept of "intellectual property."

While it is true that this mechanism has settled over the years, creating equilibriums that are very difficult to disrupt, perhaps something can be done. One could, for example, re-balance the weight between the last mile (private) and all the previous miles, allowing, for example, the public bodies who participated in the discovery the authority to impose limitations to the patent pricing, time, or even duration.
Pharmaceutical companies have therefore been adopting more and more the practice of the technique of the "evergreen patent", which consists in slightly changing the active ingredient of a drug, so as to be able to apply for and obtain the renewal of the patent, thus gaining the possibility to continue selling it exclusively as if it were new, and continue practicing monopoly prices. Gleevec belongs exactly to this category. It is a long-standing drug, to which Novartis has added a salt (that has no use in its function as a drug) just to be able to apply for an extension of the patent. It is exactly this practice that India has declared unconstitutional.

In conclusion: although the research is both private and public, the balance leans heavily towards the world of public research, and this is all the more true when the overall consideration is not limited to the field of biomedical research, but includes all the disciplines that have led to the present scientific knowledge, which brought to the discovery of the drug.
It is therefore right and proper that the world of public research begin to impose the terms of use on the results of their research, possibly in order to limit the monopoly (which unfortunately sometimes becomes abuse) of those who have taken advantage in a distorted manner of the otherwise legitimate right to intellectual property.

'Evergreening' Is What Drug Companies Do To Increase Their Profits Doctors Without Borders / MSF-USA
More in this category: « Dina Madi - #1 Patamu Stories
back to top

[DESIGN WITH LOVE BY SAMBADEAMIGO • PROGRAMMED WITH MORE LOVE BY FRANCESCO AND LUCA, POWERED BY INNOVAETICA].
Patamu.com is property of Innovaetica SRL - P.IVA. 12170501006