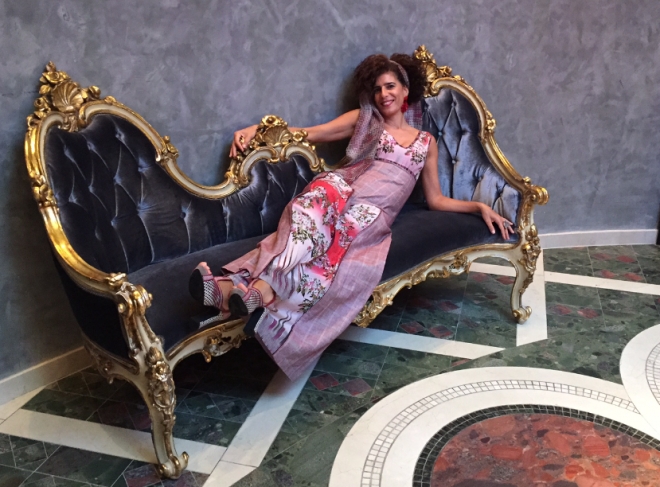 Dina Madi, our first featured Patamu Artist for the English Blog, is a composer of Jordanian origin, with good looks, a penetrating gaze and charming French accent. Her music, intense and original, ranges from house to techno, fused with oriental rhythms.

Dina Madi, our first featured Patamu Artist for the English Blog, is a composer of Jordanian origin, with good looks, a penetrating gaze and charming French accent. Her music, intense and original, ranges from house to techno, fused with oriental rhythms.

Dear Dina, first of all welcome to the Patamu world!

To get to know you better, tell us where you were born, in which countries you lived and what you studied. How much did being a "citizen of the world" influence your music?

Thanks Francesca! I am of Jordanian origin but I was born in Lebanon and lived in several countries including Spain, Algeria, Russia and Switzerland. My father was in fact a diplomat and we moved every 3-4 years. In 2002 I finally decided to move to Rome. I have always maintained a close contact with Jordan. I lived there for a couple of years and often return on holiday to spend time with my grandparents, aunts and uncles and numerous cousins. I attended French school in the various countries where I lived, which is why many people tell me I have a slight French accent. I then studied translation because I always liked the idea of being a bridge between cultures. I began to study piano and music theory at age 6 and continued for about twelve years, attending the conservatory as well, with a few breaks here and there due to my family's moves. Having lived in these various countries and been exposed to many different cultures has profoundly influenced my music.

Soul Whispers is your first album. How did this project take shape? And what about the whispers, are they your soul's whispers or did you mean it in a general sense?

Soul Whispers was born for fun and to fulfill a dream at the same time. When I started to compose electronic music a few years ago, my dream was to be able to make an album. Last year, after a period of extensive travelling, I went through a very intense creative period and felt the desire to share with others the emotions and happiness that composing gave me. I believe that music is whispered by the soul and you have to listen carefully to catch it. Music can also be a key that gives us access to parts of our most intimate and hidden self, just waiting to be revealed. I am convinced that our soul always whispers something to us, advice, messages, sensations...

Where do you get your inspiration from?

I get it in various ways. It can be through travel like Oriental Bliss, which I composed after I returned from Costa Rica, a country thatis an explosion of life at all levels, with such exuberant nature, full of colors, insects and animals of all kinds. Or it may come as a sudden inspiration, a melody that resonates in my mind as I try to fall asleep like 7 Notes. I began the piece with those seven notes and then the rest followed. Other times it's the electronic sounds themselves that give me the idea for a piece.

Your compositions are very evocative. Have you ever thought of integrating them into larger artistic projects, with visual performances, dance or theatre for example? What is your relationship with the other arts?

Thank you for choosing those adjectives! Actually, that is my greatest wish. Last year a friend of mine who practices tribal style belly dance showed me some videos of this type of dance and this inspired me to compose a piece for her and her group. It's called Tribal. With that piece I realized that what I love most is to combine music with dance, for which I have always felt a great passion and practiced for several years. In addition to music and dance, I also like photography and one can say that I'm a big “iPhoneography” fan.

Where can we listen to your album and what are your next projects?

The album is on the major online stores including iTunes, Amazon and Spotify. In the coming months I will be working on a couple of video clips for my singles Beyond and Techno Nights. I am also in contact with a choreographer with whom I may collaborate this summer on a show that blends music and modern dance ... so if you want to know what happens you can follow me on my Facebook page www.facebook.com/DinaMadiOfficial/

What would you tell an artist who is getting into the music scene?

I would definitely recommend Patamu to any artist currently getting into the music scene. It is very easy to protect one's work for a very symbolic amount or offer a more substantial support if one wishes to. Patamu was by my side from the very beginning when I didn't know much about the legal aspect involved in protecting my work. Moreover, Patamu sees and supports the artist in his uniqueness. And now they also work with royalties if an artist wishes to!

Arabella - Soul Whispers Dina Madi
More in this category: « Open Ministry, attempts of cohabitation between direct and representative democracy in Finland Pharmaceuticals, evergreen patents and open licences »
back to top

[DESIGN WITH LOVE BY SAMBADEAMIGO • PROGRAMMED WITH MORE LOVE BY FRANCESCO AND LUCA, POWERED BY INNOVAETICA].
Patamu.com is property of Innovaetica SRL - P.IVA. 12170501006